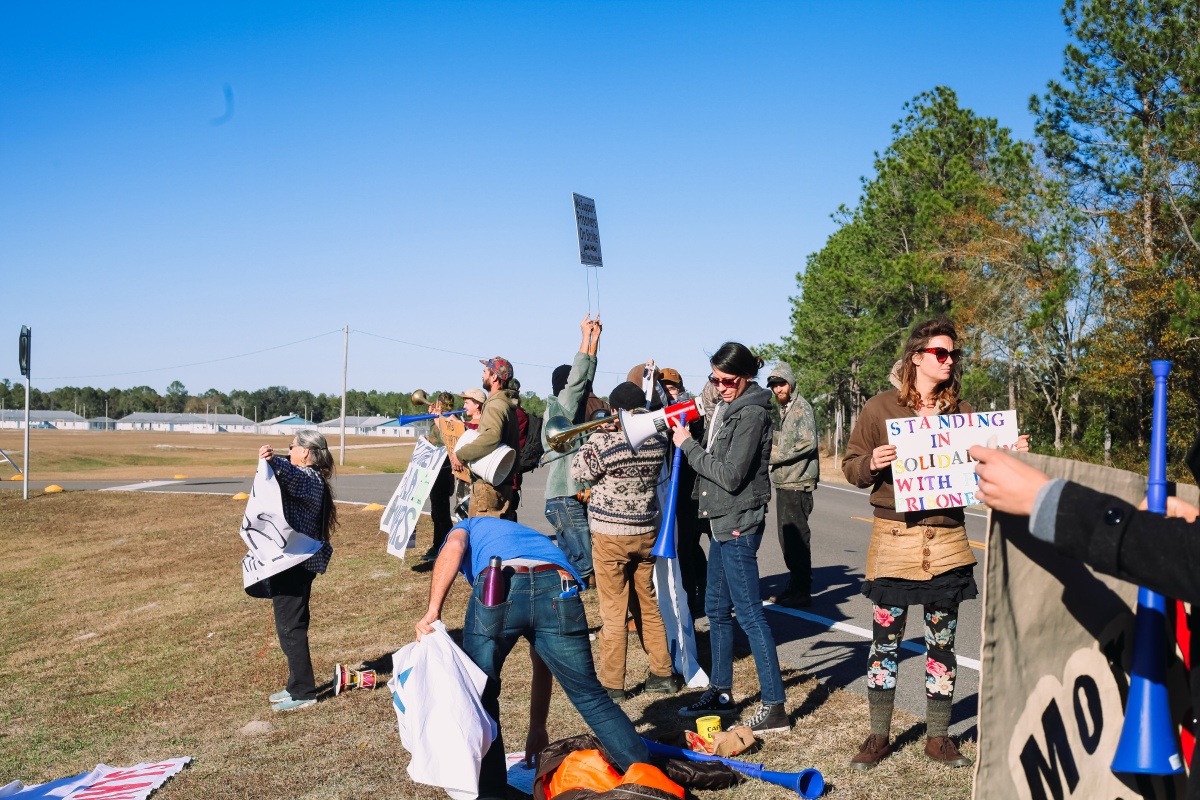 A little past 3 pm, in the midst of a coppery gold, cloudless North Florida winter afternoon on January 15, 2018, protesters gathered on the rural road facing the remote Lake Butler Correctional Facility. They came together to speak out against mass incarceration in America and the unpaid “slave” labor of convicts, and to show solidarity with the prisoners inside, who were then participating in a statewide, daylong labor strike.

The protesters – a group of former convicts, veterans, union activists and distraught mothers – coalesced into a noisy caravan as they left their cars along the roadside, and marched back and in front of the facility, where state laws permitted them the right to assemble. (Within prison property, protesting is proscribed as an illegal offense).

Beating makeshift drums, blowing into trumpets and carrying signs, the stream of protesters led a rising chorus of chants:

“Brick by brick! Wall by wall! This prison slave camp has to fall!’

“We, will end, the department of cor-RUP-tion!”

The remote prison facility gleamed like a metallic gash amidst the silent pinewoods of North Florida. Seen from the sandy banks of parched grass along the road, the prison looked like a militarized fortress of snarling barbed wire, glinting in the failing afternoon sunlight.

“We’ve been building toward this for years,” Karen Smith said over the drums and chanting. “The work strikes are going to get ramped up. The prisoners are the labor force; they are making the profits for the corporations. Now they’ve decided to sit down and not do it anymore.” Smith is an organizer for the Incarcerated Workers Organizing Committee, a wing of the Industrial Workers of the World.

Harsh criticisms have mounted in the last several decades over America’s private prison system, which, when coupled with the so-called “war on drugs,” has incarcerated 2.2 million people. Most of this population are poor minorities incarcerated for non-violent, drug related crimes. Within prison, they are forced to do menial work for corporations for little to no pay.

Many amongst those protesting were former inmates who bore bitter memories of the treatment they experienced in prison.

One former inmate, who asked not to be identified by name, was incarcerated at a Sumter County prison, where he claimed the guards were overtly racist and often did not intervene in physical fights between inmates.

Amongst those in the crowd that day were women who had sons, brothers, or husbands inside.

Arica Redding, who has been protesting for four years to appeal what she believes to be the unjust conviction of her 14-year-old son

Reddick’s son, Corey Lee Sutton, was incarcerated in 2012 in Lake County Florida under what she believes to be unjust sexual assault charges. Since her son’s arrest, Reddick has attended rallies protesting mass incarceration and unpaid labor. It was four years after her son’s arrest before she caught the attention of a Washington-based rights organization, The Innocence Project.

“They [the prison guards] took him and put him in there with six grown men and they beat him,” Reddick said. “He’s the youngest one in his prison right now.” Sutton is facing 58 years incarcerated.

The group of protestors formed a half circle in front of the facility’s main entrance to share their experiences and beliefs relating to the prison system.

“The United States is home to the largest literal slave population in the world, thanks to its mass incarceration policies,” a man said into the megaphone, reading from the striking prisoners’ statement for the public. “Now, the slaves have decided to revolt.”

The light faded as the day wore on, though the protesters stayed until nightfall. In the distance, two watchtowers ranged low against the horizon, and above the dull gleam of the silver prison roof, a wide column of sparrows floated ominously in the sky.

Restless adventurer and lover of life. View all posts by jared8796