The Superstition Mountains ride the horizon east of Phoenix like the spine of a dying stegosaurus, the broken skeleton of upturned Earth baked to a leathery brown beneath the white-hot aura of the sun. In the warm, early morning light of December, the mountains look like serrated terracotta, their dusty brown slopes rising two thousand feet above the basin below like supersized mining spoils of shattered clay pottery. Driving up to them from several miles off, its easy to imagine at first glance that the mountains- a landscape seemingly parched, void of water, endlessly exposed to the suns ruthless gaze- are inconducive to life. But to believe such a thing is to be deluded.

There are cacti and birds, lizards and snakes, smokecolored herds of pronghorns and mule deer. If you go far enough up into these high and forlorn hills, you can even find remnants of former human life.

From the very beginning of our hike this morning, the path up into the hills seems unusually easy- this, I will later learn, is like many things in the desert: mere mirage, uncomfortable self-delusion.

But for now, we amble at an idle pace over the gently rolling, broken rock, saguaro studded parklands flanking the south side of these mountains, taking in the vast swallowing silence that is the still winter morning and the empty horizon that is the view to the south. Not a trace of clouds can be seen in the sky. Hardly a breath of wind stirs over the landscape. All is enveloped in an overwhelming stillness.

We are walking up into the heart of the mountains, where two miles up, in a narrow glen so dry that water runs through it perhaps a couple of days out of the entire year, there are ancient petroglyphs carved into the mountainside that date back to the time before Columbus. Humans have inhabited these lands for thousands of years, though the earliest evidence of humanoid habitation is linked to these markings, which have been dated back to 700 A.D. For thirteen hundred years the petroglyphs watched over the mountains as civilizations rose and fell. For thirteen hundred years the inscriptions have remained, watching the passing of the people.

It is our third day in Arizona. Still, there are things about the desert that I haven’t gotten so used. I’ve never been in a desert. I’ve spent my whole life around water: in Florida, surrounded by the ocean, and in Montana, where there are snowfields and rivers.

I’m still swimming with the memories of that first drive in from the airport, through the uncompromisingly flat and overwhelmingly bright salt basin surrounding Phoenix where midafternoon sun melted a searing white hole in the sky. The endless saguaros and brown bushes that rushed past the windows of the car, I soon picked up, are staples along this side of the state, and the flat brown wastes through which we flew on the highway was the Sonoran Desert, a dry inland ocean that runs clear past the horizon to Mexico.

Later that first evening, I scrambled up to crest of Eagle Rock, from where I could see the baked serrated ridgelines of the Superstitions held forth against the sky in a golden, dreamlike haze.

The crunching of our footsteps resounds clearly against the still morning air as we continue up the mountain trail. Towering saguaros, some fifty to a hundred feet tall, range far apart along the rumpling foothills at the base of the mountains. The path is steepening, recoiling into tighter and tighter snarls like a snake withdrawing into a ball. The trees are growing more frequent, though they are small and easy to see through, filtering in all sunlight in a cool latticework of shade. Slowly but surely, we begin to gain altitude. 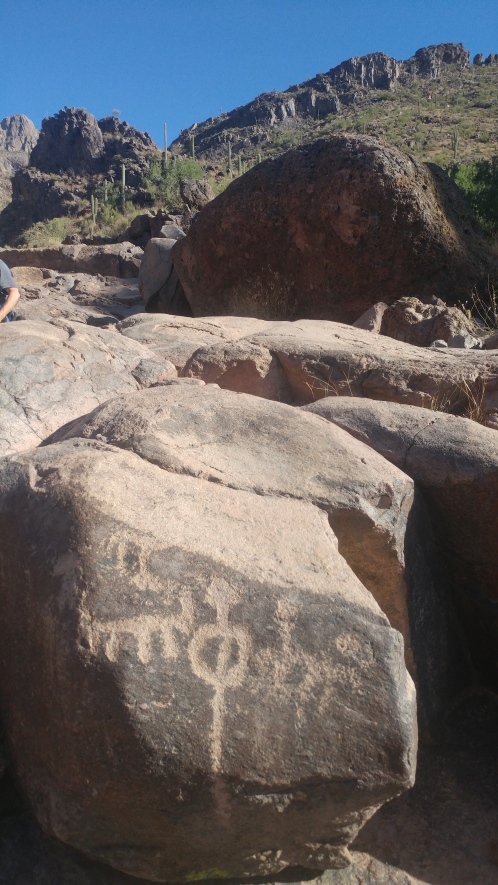 Nearly an hour into the climb, we come to a narrow gully of polished, smooth sandstone. And there it is, twenty feet down from us, on the opposing wall across a slender pool of stagnant black water: intricately carved petroglyphs drawn carefully into the mountainside. There are ibexes leaping, hunting parties chasing, cryptic-looking beings engaged in ritualistic dancing.

The desert wind would salt their ruins and there would be nothing, no ghost or scribe, to tell any pilgrim in his passing how it was that people had lived in the place and in this place had died.

So wrote Cormac McCarthy in his desert-western masterpiece, Blood Meridian, lyricizing the unknown death of a civilization whose identity was lost to time. Here too, we sit amidst the ruins of a lost civilization.

We sit for a moment to take pictures and rest before starting the hike back down. The red rocks on which we are now resting, contemplating the basin far out to our south, are the same red rocks upon which some unknown natives likely gathered in the flickering evening firelight of eons ago to come together to perform their artwork. Here, on these rocks, high in the Superstition Mountains, we are resting on the palimpsest of civilizations comes and gone. Walking amidst the shadows of ghosts.

That thought haunts me that morning as I walk back down through the parched arid foothills. It haunts me as I look out to the far-off mirages of blue mountain ranges, floating on the hot white rim of the horizon.

I'm a multi-award-winning writer and independent journalist whose essays and reportage have been published in The Nation, Vice News, the Los Angeles Review of Books, El Faro, and NACLA, among others. As an investigator, my focus is on violence, environmental conflict, political and social struggle in Central America, particularly Honduras. As a writer and essayist, my wider concern is understanding the historical dynamics of social struggle and interrogating fundamental presuppositions concerning humans relation with one another and the planet. I've spent two and a half years as a reporter covering social and environmental strife in Mexico and Central America. In 2018, I was a grantee for the Pulitzer Center for Crisis Reporting, for whom I covered the continued existence of the Zapatista movement 25 years following their uprising. Since then, I've reported on MS-13 gang violence; indigenous radios in Guatemala; anti-government resistance in Honduras; and deadly environmental conflicts. View all posts by jared8796