You wake up in the morning to the sound of rats skittering above you.

Their little feet make quite the racket against the thin, plywood ceiling of the barn, and after five agonizing minutes of rolling over endlessly, trying to get in a last little bit of sleep, you realize you’re playing a hopeless game. Reluctantly, painfully, you get up and stagger out to the main living room.

Evidently, you realize as you look out the broad wall window that faces the lake, the rats came in for a reason. The world outside is enveloped in white. Snow spirals down silently in fat, frosty flakes, and when you press the palm of your hand against the windowpane, the glass is astonishingly frigid.

It’s gotten colder inside. The furnace probably hasn’t been replenished in four or five hours, and in the time the building has lost a substantial amount of heat; the temperature, you think, can’t be more than sixty degrees. 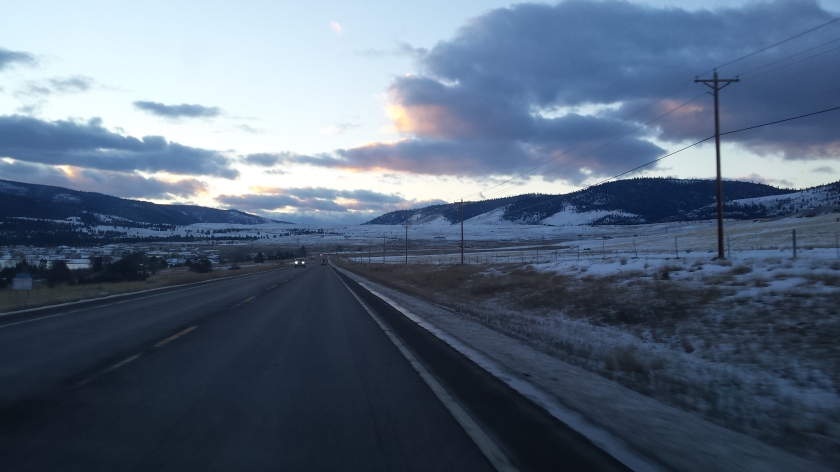 Going quickly, you step out to grab a few of the cedar planks you chopped last night, stacked haphazardly in a snow-crusted pile outside the door.

Gently, you set the planks triangular-wise over the remaining glow of embers in the furnace. To make sure you don’t lose the flames, you crumple up a few pages of the Flathead Beacon, that sadly unread but convenient local newspaper, and stick the wad just beneath the wood.

Then, you wait. Kneeling before the furnace, you watch for several tense moments until, at last, the newspaper beneath the plank catches and the first orange flames begin licking upwards along the woods’ split edges, at which point, assured that the building will inevitably heat up again, you shut the heavy iron door and sink back into a lazy chair.

It is almost whiteout conditions; you can hardly see the dock beneath the balcony, and anything beyond that- the lake, the trees, the mountains in the distance- are utterly invisible. Gone, swallowed by the nothingness of white. Judging by the impeccably neat layer of soft new snow that’s accumulated on the railing outside, you guess it’s snowed four inches overnight. And this is only the beginning.

It is a peaceful morning, you think to yourself- a good way to start the New Year. For a few minutes, with the crackling whisper of the furnace in the background, you peruse some favorite books, though soon, you realize you can’t read right now. You find that every few seconds, your eyes are inevitably drawn towards the mysterious whiteness beyond the window.

The fire is getting rolling now. You hear the first loud snaps of the burning wood, and the slow, deep breath of oxygen being sucked in through the vents.

Now awakened by the same rats that disturbed you from your sleep, your cousin has emerged from his room as well. Wordlessly, he walks to the window and stares meditatively at the silent falling of the snow outside.

Your stomach gargles. Just as you hear your dad rolling awake, you throw on your jacket, your boots and walk outside into the cold and whiteness of the heavy snowfall, down to the cabin to begin fixing breakfast.

You’ve been here for six days now, six days in the rumpled spine of Western mountains, six days out in the ice and wind and cold.

On the first day you came in late at night, having landed at around 1 A.M. after a delayed departure in Minneapolis, and when you pulled up to the cabin, the gravel road- which remains virtually unused during the wintertime- had disappeared beneath a smothering layer of snow.

Yo stumbled up, shivering, onto the porch, (you can only be dressed so warmly after being in a heated plane for six hours) only to find that all the doors had been locked and that we didn’t have the key, effectively cordoning us off from any hope of food, water, or warm showers for the night.

“Should we call the locksmith?”

“No, no. We’re in the middle of nowhere, it would be hours before he gets here.”

“Should we punch out the lock with a hammer?”

You looked at each other miserably and gazed up at the soft snow drifting out of the firmament.

“No,” your dad says reluctantly, the freezing cloud of his breath lying clearly against the air. “Our plan was to stay in the barn, anyways.” Alas, with numbing fingertips and red ears, you set about the laboriously painful, disheartening task of starting a fire in the middle of the night.

When you walk upstairs into the barn, the freezing air locked inside is almost worse than it was outside- it can’t be more than twenty degrees, you think. You flick on the lights, filling the room with the soft, orange cant of the chandelier- a rickshaw contraption of PVC pipes and deer antlers- the newfound light stirring awake a horde of hibernating moths.

Twenty minutes and a pile of burnt matches later, after scrounging desperately for newspapers and scrap wood, you have a fire going. Slowly but inevitably, the freezing wooden icebox that we call the barn will become livably warm again. In the meantime, without removing any layers of your clothes, you wrap yourself in a burrito of moth-eaten quilts and promptly pass out on the couch.

You wake up late the next morning. Your dad, having gone into Kalispell early after receiving directions to find the key from Grandpa, has finally unlocked the cabin.

You walk out onto the porch. An unusually warm wind has risen out of the south,

sweeping over the steely waters of the lake and sending curling rows of breakers against the rocks (though it must be pointed out here that “warm” at this time of year means twenty-five or thirty degrees). The sky is gray, a patchy quilt of low clouds with the occasional shaft of sunlight slipping through. Out on the bay, a string of Canada geese, despite being thrown incessantly by the winds’ unceasing chop, paddle contentedly parallel to the shore.

After discovering that skiing will have to wait until tomorrow, you set about the strangely gratifying task of shoveling snow to make pathways between the cabin and barn.

You love this place; you have since as long as you can remember. Your grandpa bought the property in 1977 when it held little more than a three-room cabin and a dock, but over the years expanded it to include the barn, the kitchen, the double-sized dock, and the porch. The property itself sits on the north shore of Elmo Bay, the western tongue of Flathead Lake, which is largest natural reservoir on this side of the Mississippi. Located on the Salish-Kootenai Indian Reservation, it lies in the shadow of Chief Cliff, an enormous crown of granite walls jutting up from the mountain to the north.

In the early mornings, lone knots of animals- whitetails, mule deer, the occasional black bear- slip down into the shaded groves of fruit trees that lie along Grant’s Lane, scavenging for fallen peaches and pears; during the daytime you hear herds of cattle bawling in the hills across the road. On summer nights, you hear the booming echo of the powwow drift over the stillness of the lake, and in the wintertime, when the snow falls and temperature plummets, you hear the distant songs of geese.

You are up at seven the next morning, insulated beneath several sweaters and a ski suit- and still shivering nonetheless, despite the copious layers of clothing- driving northwards on the rime-ice roads of Flathead Lake’s western fringe. Undulating rhythmically along the scalloping mountain road, we gaze momentarily, whenever the trees and rocks slip out of view, upon the enormous spaciousness of the valley: the hard, deep blue of the lake, and the far-off mirage of Glacier, a distant etching of white mountains scarved in mysterious, grey rags of clouds.

At the town of Lakeside, you turn to the west, inwards towards the region surrounding Blacktail Mountain. For a short stretch of perhaps two miles, you pass through a bucolic smattering of creekside horse-ranches and pastures, though the valley walls eventually close inwards and the road inevitably begins ascending into the mountains.

The mountains surrounding Blacktail are hardly sizable by Montana standards. In truth, they are not even classified as being part of any named range; nominally, they might be categorized with the insignificant Whitefish Mountains to the north, though in reality they are just another anonymous, geographical patch of rumpled forest-service land. The highest peak at Blacktail tops out at a little over six thousand feet; by comparison, the tallest point in Montana, Granite Peak, is twice that height. Thirty miles to the east the dramatically wrought Glacier Mountains often top out at around ten thousand. Blacktail Mountain and the surrounding range- if you can even consider it to be a range- is nothing by Montana standards.

But even then, these mountains are still unceasingly beautiful. It doesn’t do justice to measure them by Montana standards: these would easily be the tallest mountains were they west of the Mississippi, somewhere in the Appalachians.

As you drive towards the top, mountain road grows unerringly steep; the fir trees are buried so deeply in snow that they seem like towering contortions of ice; and the road affords astonishing views of the Earth around you: in the refined, icy clarity of the air, you see the mottled mountainsides of spruce fall away in all directions.

Restless adventurer and lover of life. View all posts by jared8796